The Man Who Never Died

Anyone who have followed my doings in later years probably know how important the old rebel singer and labor icon Joe Hill has become to me. In 2015 I toured much of Scandinavia with the US-american topical singersongwriter David Rovics (where many of the dates were sponsored by the Skåne division of the swedish labor educational organization ABF) because of the centennial anniversary of Hill's execution by firing squad. The same year I started giving lectures and workshops on Hill's and his fellow "wobblies'" method of making protest music. But by then I had already - in secret - started working on the musical about the man.

The first thing that had ignited my writing process was The Story. It's a prime example of the classic tragedy formula "the hero's journey" associated with characters like King Oedipus or Luke Skywalker: our protagonist is orphaned and thrown into the world, but however diverse his adventures might be they only serve to bring him back to a showdown with his own past. In Joe Hill's case, the hero is born into a deeply religious family. After his parent's death he becomes famous for writing songs often making fun of that same religion, only to end up a Christlike martyr for his secular movement.

But why a musical? Well, since the legendary songwriting method of Joe and the other wobblies included stealing melodies from the Salvation Army and then confronting the original versions in public it was easy to envision these two singing popular movements battle on stage. I had also realized that the musical format combined ambitions and abilities I had developed over the years wrtiting both novels and themed albums of songs: to write long, epic tales with short songs. And once again: The Story. It involves all the elements of great drama, complete with fascinating subsidiary characters and unexpected turn of events.

All in all the musical consists of 34 original songs in at least 70 different versions. Before the stage premier it will be released for streaming with different singers portraying the different characters. Look out for further news on the development of the project!

One of the songs on my album Songs Of War, Women & Men is actually taken from this upcoming musical. It's about the woman to whom Joe Hill dedicated one of his last songs (The Rebel Girl). Listen and read here: 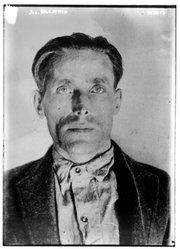 The police's mugshot of "Joe Hillstrom" when he had been taken in for allegedly killing retailer Morrison and son in Salt Lake City.

Joe had been born Joel Emmanuel Hägglund in 1879 and grown up in Gävle, Sweden. Like millions of other swedes he fled the poverty of the Old Country and came to the US where he became an organizer for the militant  I.W.W. union using cartoons and, especially, satirical songs to spread the message.

In 1915 he was executed for a murder his supporters were sure he had not commited (and among others the President of the USA actually pleaded for his life: possibly afraid that the execution would grant Hill the status of a martyr. If so, he was dead right.)